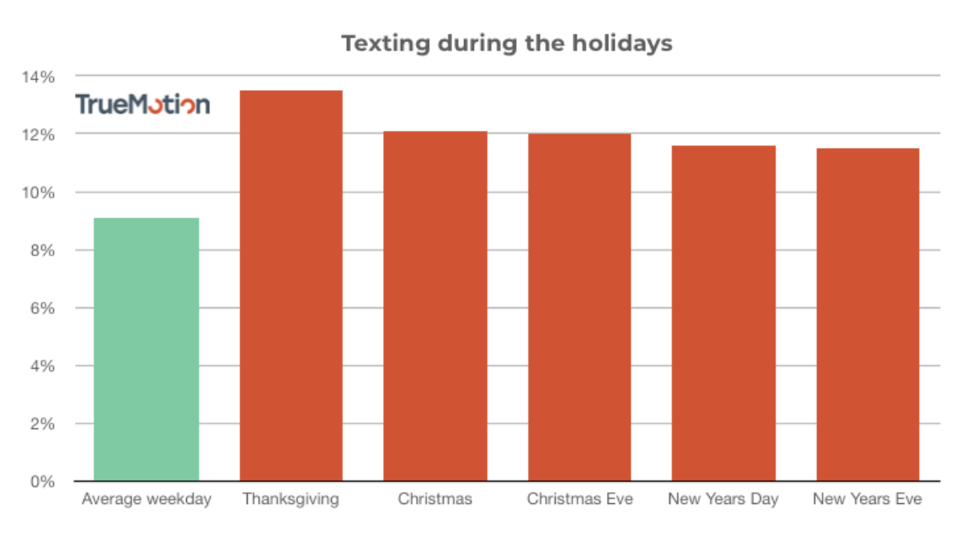 Every year, more Americans travel for the holidays. In 2017, nearly one third

of Americans hit the road. This Thanksgiving saw the most travelers

Drivers are 1,200% more likely to crash when dialing a phone number. Just holding the phone while chatting increases your chance of crashing by 220%

When preparing to drive for the holidays, we tend to think about traffic. We might account for snowstorms and be cautious of icy roads. But, most of us don’t think about another road danger: distracted drivers. Yes, it’s the season of distracted driving. Here at TrueMotion

, where we use smartphone sensor data to understand how people drive, we wanted to see if distracted driving increases during the holidays. We looked at data from over 3,000 drivers in the U.S. from November 18, 2017 through January 3, 2018. Our findings were shocking. On a typical weekday, drivers spend about 9% of their time texting, scrolling through their social feeds, and emailing – active phone use.

But during the holidays, active phone use jumps an incredible 33%.

While there’s a lot of bad news in this data, there’s some good news, too. Drivers make less phone calls during the holidays, including both handheld and hands-free calls. Calls from the road were down 45% last holiday season. It’s a reason to celebrate: Drivers are 1,200%

more likely to crash when dialing a phone number. Just holding the phone while chatting increases your chance of crashing by 220%

. As we drive into 2019, keep your heads up and your eyes on the road this season. We know you’re excited to arrive and want to let your loved ones know about every travel update. But – and we’d think they’d agree – it’s more important that you arrive safely than tap out a text that says you’ll be there in 15 minutes.

Get Living 2021: September Swing
back to the blog